This is part of an ongoing series of printable pamphlets designed to explain how money flows through public research universities in general and the University of Michigan in particular. The pamphlets are intended to clarify arguments and push back against pervasive and seemingly “common sense” narratives about the crisis of public higher education that impede, rather than advance, meaningful political action. We hope tactics and strategies will emerge from these counter-narratives—after all, we can’t fight what we don’t understand. Download the printable version of this pamphlet here and see the Resources page for the entire series.

Since the 1970s in the United States, there has been a shift from industry to finance as the driving force of the economy. Instead of investment in productive capital, money has been increasingly invested in the financial sector, seeking speculative profits. This money always seeks profitable outlets, namely projects, institutions, or individuals to which it can be lent to generate interest. Before 2007, as the graph on the next page shows, much of this money flowed into the housing and personal credit markets. After the financial crash, however, higher education became an important site of investment for the capital accumulated in finance, primarily in the forms of university construction bonds and student loans. Student debt is now the largest source of personal debt at over $1 trillion.[1] During the same time period, university construction debt has grown exponentially as well.

The transformation of the public university into a site of investment has had devastating consequences. In this pamphlet we will explain how these flows of finance capital affect the university, with a special focus on tuition and the overall demographics of the campus. 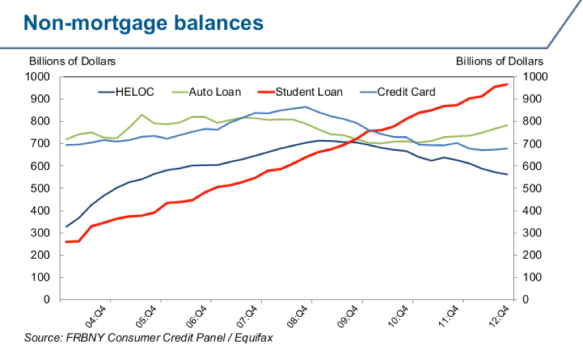 While students can take out personal loans via student loans or credit cards, universities get their loans through a different financial device known as a bond. A bond can be thought of as a package of smaller loans. Instead of borrowing money from just one bank to raise money for large construction projects, the university issues a bond as many little pieces of debt that institutional investors (like banks, pension funds, and hedge funds) then buy. The university then redeems these bonds at scheduled times in the future, paying back both the principle (the original cost of the bond) as well as a set rate of interest along the way. The large banks that help the university sell the bonds (think Bank of America or Citibank) then make money on the fees they charge the university for this service. The buyers of the bonds make money on the interest that the university agrees to pay them. For most construction bonds, their repurchase is spread out over 30 to 40 years.

As universities take on more and more institutional debt, tuition also tends to rise since after all they have to pay back what they borrow. Tuition is the only revenue stream that the university administration directly controls. The administration cannot count on increased revenue from the state or the endowment and both of these streams of revenue come with certain restrictions. But administrators can raise and spend tuition however they want. That means that they can give themselves raises, build legacy projects, and invest in luxury facilities that have nothing to do with education or research.[2] And rising tuition, of course, means that students must take on more student loans.

Universities have not always used bonds to debt-finance construction—they only started in the late 1980s and early 1990s. Before that, buildings at state schools were primarily paid for with state funds. With state funding, universities paid no interest and no service fees. So why did public universities switch to a more expensive form of financing their construction? One part of the answer is that state funding came with restrictions, so for example the state had control over the design of buildings, reigning in university administrators’ designs for legacy building projects. The utilitarian, concrete Modern Languages Building was built with state funds—and the state had the final say over the architect—while North Quad, with its LCD monitors and vaulted ceilings, was financed with bonds.[3]

Another part of the answer is that switching to expensive Wall Street-based funding has allowed public universities to build more: not just more buildings, but at a more rapid pace. This rampant construction became necessary as public universities switched to a model that relies on attracting wealthy out-of-state students and charging them exorbitant tuition. Because wealthy out-of-state students have many college options, universities have been sucked into a building arms race, building luxury facilities at a stunning rate. Over the last decade, University of Michigan has spent on average more than $500 million each year on new construction.[4] The majority of this construction (despite headlines about recording breaking “gifts” from wealthy donors) has been financed through bonds—money that must be paid back with interest. U-M will pay over $126 million in interest in 2014 alone, and continue to pay over $100 million a year through 2028.[5] More generally, “from 2002 to 2010 . . . [t]he total debt liabilities of public research universities increased by more than 50% to $26,615 per student—and debt service payments went up by more than 86%.”[6] Making these ever-increasing interest payments generally sparks tuition increases, creating a vicious cycle of vanity construction and tuition hikes.

Has this construction spree been necessary? No. These are luxury buildings built to attract “high end” consumers, out-of-state students willing to pay high tuition. Such construction actually makes the public university less accessible for and accountable to working and middle class students because it contributes to continual tuition hikes. Furthermore, the construction boom and the rising tuition on which it depends partially account for the exclusion of underrepresented minorities, since it privileges the whims of wealthy out-of-state students who tend to be white.[7] (This is not to ignore the university’s poor recruitment strategies, the hostile campus climate, and generalized white supremacy). In short, the debt-based growth exemplified by the University of Michigan is a key part of the evisceration of public higher education in favor of a small economic and racial elite.

Unfortunately, there will be no return to an entirely state-funded university. Even if the political will to fund universities did exist, states no longer have the money. The most direct problem, then, is not the state government but the class that has opened the university to capital: the university’s upper administration. Instead of seeing these executives and managers as necessary for the functioning of the university, we see them as obstacles, as the class responsible for its ruin. They are the ones who have tied the university to Wall Street, who have taken on massive debt loads and built an increasingly exclusionary university on the backs of students and workers. The university’s key function is instruction not construction, and students and workers have a lot of experience in such collective knowledge production. It should be left to us. In our vision, the university is democratically run by those who study and work there—the only way to address the misery and exclusion that the administrative elite so ably reproduces.

Download the pamphlet for printing: Construction Not Instruction PDF

4 thoughts on “Construction Not Instruction: Bonds and Buildings at the Public University”